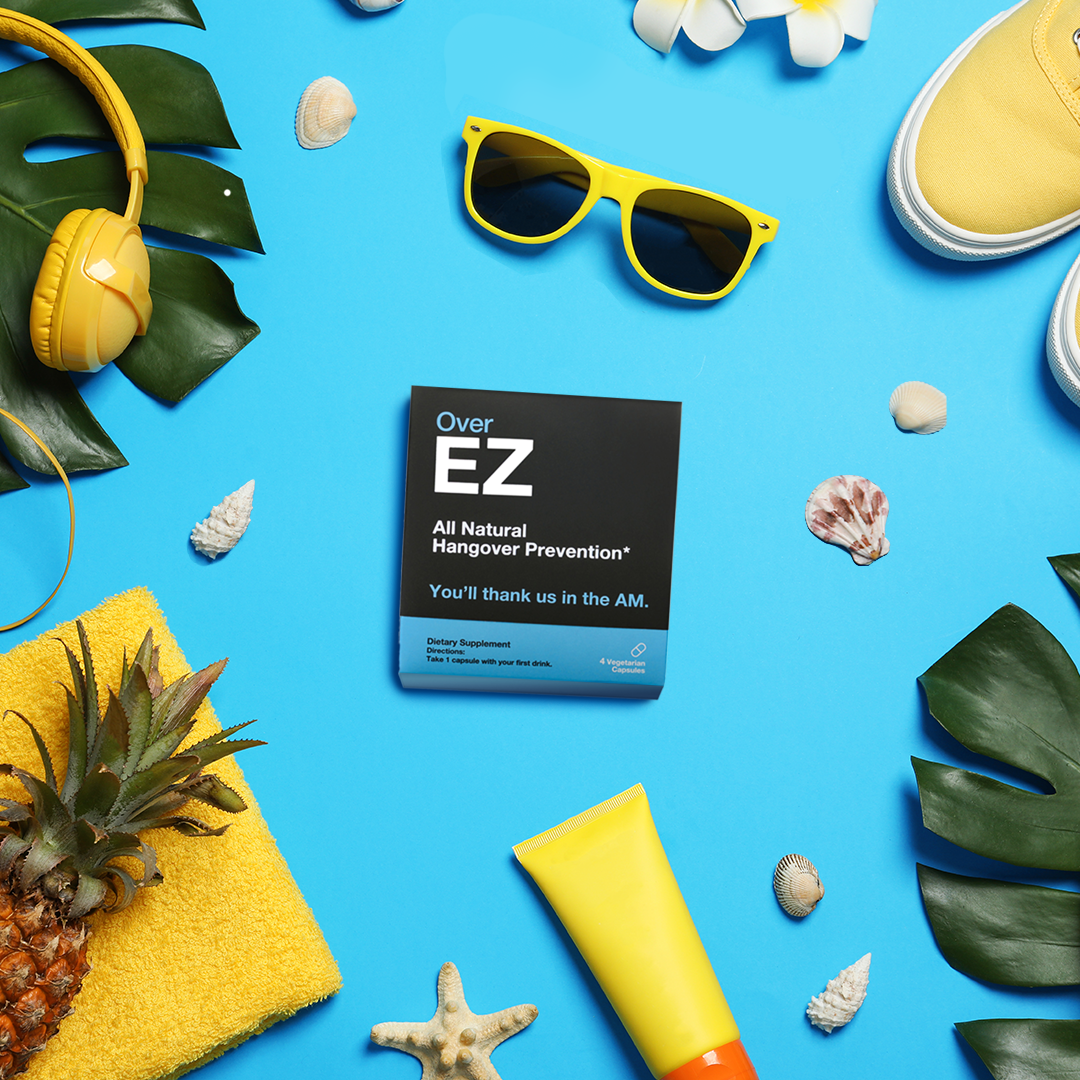 Hangovers are, unfortunately, a very common side effect of having one too many drinks when out on the town. We’ve all had them, but some people undoubtedly suffer a lot more than others. Do you suffer from extra bad hangovers? Do you find yourself bedridden, or close, for a day after drinking? Two days? Are you sluggish and unproductive the next day, clinging to your cup of coffee, hoping for some dose of precious energy to get you moving?

Sleep troubles holding you back? Let’s fix that. Have fun nights turned into painful mornings? Alcohol Recovery is here. Feeling sluggish in the afternoons? Not anymore.

If you think that you might suffer more than your friends after a night out, you might be right, and there is probably a reason behind it. Here are 5 signs that you are suffering from bad hangovers, the science behind your symptoms, and what you can do to fight them.

You spend the entire next day stuck in bed

The Symptom: While sleeping in a little later than normal is a common symptom of a hangover (especially if you were out late the night before), being stuck in bed all day is not. If you find yourself horizontal for a full 12-24 hours, there might be more behind that than just your typical hangover. If you really struggle to get up and get moving after a night out, it may be because you’re seriously disrupting your sleep cycle.

The Why: Drinking alcohol affects the circadian rhythm, a 24 hour cycle controlled by a part of the brain that synchronises waking and sleeping with daylight. Your circadian rhythm regulates how you respond to light cues, like the rising and setting sun, in order to keep you synchronized with your natural sleep and wake cycle. According to Dr. Christina Ruby, whose findings are published in the American Journal of Physiology, even drinking low levels of alcohol can impair the response and affect your circadian rhythm. If you drink frequently, the issue becomes that much worse.

The Solution: If your sleep cycle has gotten seriously out of whack (do your friends describe you as nocturnal?), you’re not completely out of luck. First, be conscious of what you drink and when so you can learn just exactly how drinking affects your sleep cycle. Stop early (do you really need that last drink?) and get to bed at a reasonable time. Second, after a night of drinking, leave the curtains open so that the light comes in as the sun rises. While this may mean waking up a bit earlier than you’d like to, it will help keep your sleep cycle regular. While you might not experience immediate results, over the long term your cycle will re-regulate and you’ll find yourself up-and-at-em at a regular time again, even after a big night out.

Your hangovers are lasting more than one day

The Symptom: A 2-day hangover? Yikes. That’s not fun at all - and not normal. For most people, a hangover should be completely resolved within 24 hours, says Alexis Halpern, MD, a physician at New York-Presbyterian/Weill Cornell Medical Center. If you find that your hangovers are creeping into day two or even three, you might want to check on what is causing that.

The Why: One of the major reasons hangovers can stretch on longer than expected is because sleep is such an important part of getting over a hangover. While you may fall asleep quickly when you’re drunk, your quality of sleep is diminished by the alcohol. If this is the case, you’ll wake up with a sleep deficit that only exacerbates the existing hangover symptoms. This can be made even worse if you were particularly tired before you even started drinking, meaning you just may not have the energy to bounce back like you should. Another reason your hangovers may be lasting 72+ hours is the rate at which you consume alcohol and what you’re drinking. Your body processes alcohol at the same rate no matter what, so when you drink faster you get drunker, and your hangover gets worse.

The Solution: In order to fight this, make sure that you’re not drinking when you’re exhausted. While having a glass of wine or three might be tempting after a particularly long or hard day, the resulting hangover might make the next couple of days long and hard as well. Additionally, drink slower. Space your drinks out over time (one an hour is the tried and true rule) and you’ll wake up feeling significantly better. And finally, think about what you’re drinking. Some types of alcohol may affect you differently than others. In general, it’s safe to assume that lighter colored alcohols like vodka, gin, and white wine will produce less severe hangovers than darker colored alcohols like dark rum, whiskey, or red wine. This is because darker colored alcohols contain more impurities, chemicals called congeners, that can worsen your hangover symptoms. Next time you’re going out drinking, consider what you drink, how fast you drink it, and how you sleep after a night out. Keeping those in mind, and taking action to avoid some bad habits, should keep your hangover to a reasonable amount of time - or help you prevent it completely!

You’re waking up with a splitting migraine

The Symptom: One of the most common symptoms of a hangover is a headache the morning after, often caused by dehydration. While unpleasant, hangover headaches should not be debilitating. If you’re waking up the next morning with a next-level headache or migraine that is causing light-sensitivity or nausea, there may be something more to it.

The Why: Unfortunately, alcohol is a known migraine trigger. And while you may not normally suffer from migraines, or even get a migraine every time you drink, you may still be subject to migraines when you drink some alcohols. Many migraine sufferers claim that red wine is a chief migraine trigger, and studies have shown that ten ounces of red wine, but not vodka with an equivalent alcohol content, provoked headaches in migraineurs.

The Solution: If you’re often waking up with a nasty migraine, it might be a good idea to skip the red wine and stick to other drinks. In general, lighter colored alcohols cause less severe hangovers because they contain less chemical impurities called congeners. It’s also always a good idea to track what triggers your particular alcohol migraine. Next time you wake up with a migraine, take note of what you drank and determine if there are particular alcohols that trigger your migraines. While red wine is a common trigger, it’s not the same for everyone.

You can't stay asleep when you drink

The Problem: Some people pass out like no other after a night of drinking. Others have the opposite reaction and end up waking up multiple times throughout the night without ever truly getting good, restful sleep. If you just can’t seem to get to sleep after a night out, it may make your hangover the next morning that much worse. Who wants to be both hungover AND exhausted?

The Why: Alcohol affects the normal production of chemicals in the body that regulate sleep and wakefulness. When you drink, production of adenosine (a sleep-inducing chemical in the brain) is increased, which makes you fall asleep quickly. Once the alcohol is processed, adenosine subsides as well and you’re more likely to wake up easily. This is known as the “rebound effect.” Timothy Roehrs and Thomas Roth of the Sleep Disorders and Research Center explain the rebound effect as the body’s way of snapping back to normal after the alcohol that initially helped you fall asleep is processed. This can put you in a lighter stage of sleep and make you more sensitive to your environment. Anything like a car horn, light coming through your window, or even changes in temperature can jolt you awake.

The Solution: Unfortunately, you can’t change how alcohol affects your system. However, if you know you’re going to be drinking, there are a couple things you can do to help prepare yourself and get a better night’s sleep. First, make sure to get a good night’s sleep the night before you go out. Elizabeth Kovacs, Ph.D., Director of the Alcohol Research program at Loyola University Chicago, says that getting good sleep each night leading up to that party will reduce the impact one night of drinking will have. Next, make sure your bedroom environment is the ideal setting for good sleep. Set the temperature nice and cool (around 60-68 degrees Fahrenheit) so that you’re not waking up from being too hot. Make sure your sheets are clean and your bed is comfortable. Grab some earplugs and have them ready on your bedside table before you go to bed. Blocking out even the smallest noises will be huge in helping you stay asleep once you’ve fallen asleep.

You suffer from acute anxiety

The Problem: Have you ever woken up after a night of drinking and obsessed over every detail of the night before? Worried extensively that you said something wrong or made someone mad? Stressed out about little things that wouldn’t normally affect you? If so, you’re suffering from “hangxiety” - acute anxiety that comes after a night of drinking. Hangxiety is often accompanied by strong feelings of guilt. Guilt for drinking the night before, guilt for wasting a day being hungover, guilt for whatever you may or may not have said or done while drunk.

The Why: Chemically, hangxiety is part of a kind of brain chemical rebound effect. When you drink, alcohol targets the Gaba (gamma-aminobutyric acid) receptor, which sends chemical messages through the brain and nervous system. When alcohol stimulates Gaba receptors, you feel relaxed and cheerful. Stop here and you’re probably fine. But if you continue to drink, the alcohol will start blocking glutamate, the main brain chemical that causes anxiety. This is all fine and good while you’re drunk, but it’s when your body recognizes the imbalance that problems start to occur. As you sober up, your body reacts to the alcohol-induced lack of glutamate by overproducing glutamate to make up for the difference. The more glutamate in your brain, the more anxious you feel. Suddenly, you’ve got a flood of glutamate in your system that can cause acute feelings of anxiety the morning after a night out. This chemical process is the same for everyone, but Hangxiety can be worse for some than others. If you suffer from particularly bad hangxiety, it may just be an aspect of your personality. The Psychopharmacology and Addiction Research Centre at the University of Exeter in the UK conducted a study to find out if a correlation existed between introverts and heightened anxiety after alcohol consumption. The subjects who were categorized as ‘shy’ reported much higher levels of anxiety the day after drinking than the ‘non-shy’ participants.

The Solution: If you’re particularly shy, leaning on alcohol as a social crutch is a slippery slope that can lead to dependence. In order to avoid acute anxiety the day after, take pause before you begin drinking. Think through the social situation and try fast-forwarding to the next day when you’ll have much higher anxiety levels. If you can’t ride that out without drinking, stop right there. And never treat your morning after hangxiety with hair of the dog. If you drink to ease your anxiety, you may get caught in a cycle of alcohol dependence where your hangxiety is building over time.